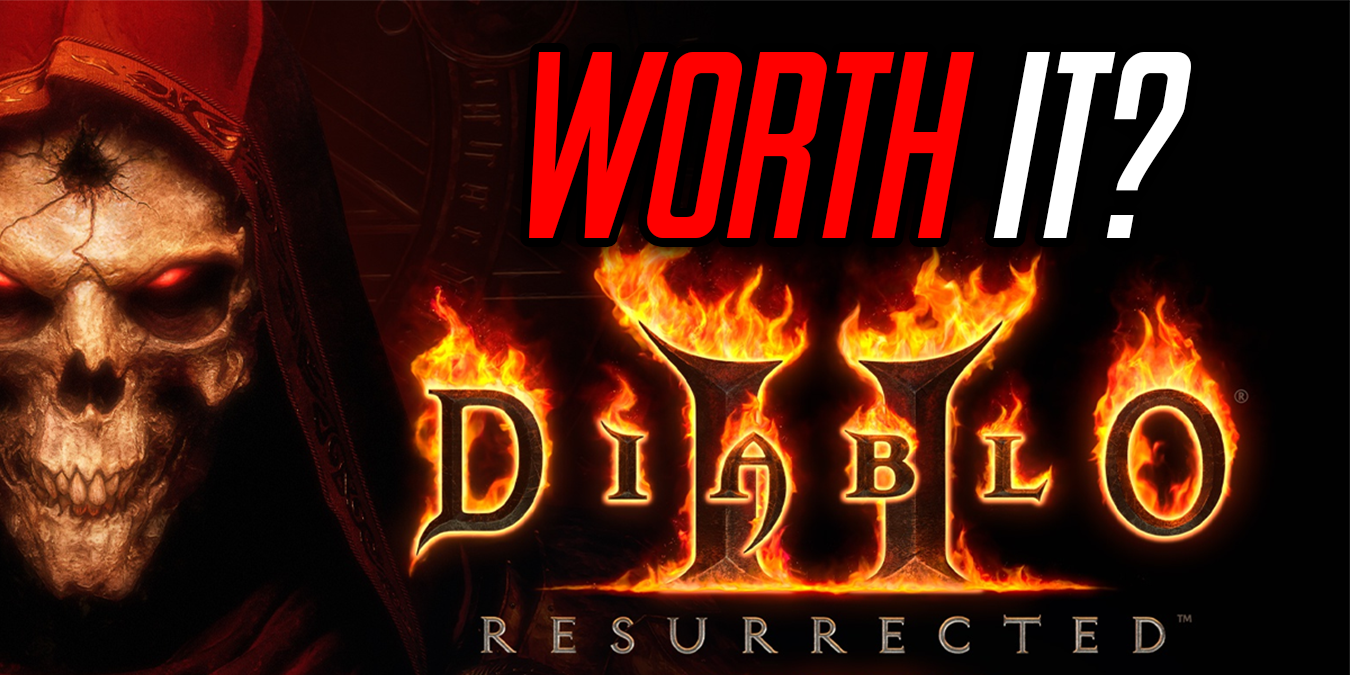 Diablo 2 Resurrected is it worth it? Being a long-time Diablo 2 fan, I asked the question myself a time or two.

Most of all the Diablo 2 players I know have probably owned the game a billion times. I know for a fact I’ve boughten 3 copies throughout my life as a PC gamer. 2 physical copies and a digital one-off of Battle.net

I want to say I was very skeptical at first whenever it came to buying the game. I was like… what’s the point it’s the same game with a new skin over top of it.

After a while, trying to get Diablo 2 to work well again on modern hardware and modern Operating System with terrible scaling. I dedicated it was time to give it a real try.

Diablo 2 Resurrected is absolutely worth it and in this article, I will discuss the many reasons why. I will also discuss why not to get the game.

A fresh coat of some graphics and being able to play Diablo 2 with ease on modern computers was the biggest decision for me by far. Sure, after putting in hi-res fixes playing on a 27-inch monitor and still having black sides on Diablo 2 was very playable… But, it really wasn’t ideal either.

Each time I got the itch to play the Original Diablo 2 I was always confronted with problems getting the game to launch. This of course wasn’t 1998 anymore, hardware, and software all have changed since the original Diablo 2 showed up.

Playing Diablo 2 on old hardware always worked fine… but it is now 2022, and a game this popular… shouldn’t have this many problems running. But, it did.

Being able to just download the game, install it, and press play for the first time in a long time really did mean something. From the Alpha photos, I can say that I was a little worried about how the graphics looked.

After booting up in real-time though the game looks fantastic in 1440P and runs smooth as silk. The real kicker here is that it really is just a skin that runs over the top of the old game. It’s kind of crazy when you think about it, but you can switch to the classic graphics if you want to by pressing “G” on your keyboard. You can also do the same on the console versions with a few different button combinations according to your console.

For whatever reason, the legacy version runs at a very bad framerate. It’s not ideal to play at all but it is playable.

I was a little wary that it does require a little better hardware than that of Diablo III. I’m not sure why it doesn’t look THAT much better than Diablo III but maybe it’s perhaps that the original game is always running in the background? That I’m not sure of… The graphics do look great though. Other than some of the character design changes I have to give it all an A+.

This alone makes Diablo 2 Resurrected worth it in my book.

If you’ve ever played the Original Diablo 2 then understand this. It is literally is exactly the same gameplay.

Far as I know nothing has changed, maybe a few little Quality of Life changes such as not having to renew your characters, a shared stash now. Since the game from what I can tell is basically a skin over the top of the original. It’s the same game that we all loved back in the day.

That being said, at the time of this writing, there is still no Ladder to experience.

This could very well be the reason someone might not want the game. They could only want to play Ladder. Which is completely understandable.

Ladder usually brings some new items and stuff to the game as everyone races to see who can be the best at Diablo 2 that season. That is currently not available and it appears Blizzard is taking their time introducing the first Diablo 2 Resurrected Season.

I welcome the small QOL changes with open arms, having to log in to renew your characters was always a PAIN. Now, we can keep our characters forever online and play with a more leisurely experience.

This mostly won’t matter for all the Ladder players out there as they usually only play ladder and that’s it.

This is purely speculation. From playing back in the day till now, I believe there aren’t as many players.

At least not yet.

That could be due to the fact that Ladder hasn’t arrived yet or all the Diablo 2 vets are just sticking with the original game.

I believe the player base will see a significant spike whenever the first ladder becomes available.

That being said, I still think there are plenty of players. While they don’t appear to be a ton of custom games going on, I’ve still been able to get a casual rush, or some free gear here and there from players.

You can also join several discord servers that might be able to up your chances with help and trading.

Since Diablo 2 Resurrected was released on consoles it now has worldwide appeal more than that of the PC.

The weird thing about whenever you use a controller on the PC it options more mappable buttons. You are able to use more skills at the same time than switching back and fourth like in the original. For you young-ins out there that don’t understand. Diablo 2 was never on consoles, and as far as I knew never was planned to be. Diablo 2 was an MMO, not to be confused with an MMORPG.

It was online but not required with massive amounts of players.

Consoles at the time did not have this capability so why would it ever be ported to it.

The PC version of the game offers the ability to play with a controller, it makes the UI a bit different but its plays like the Xbox version. Still, there have been many times that during the menu I have to get up and use the mouse or keyboard to get into the game. I’m not sure why but it doesn’t feel “Fully” supported in that half/half situation as most games are on PC. Get into the game and you are good to continue with your controller.

I do however have the Nintendo Switch version of the game. It runs fine and is a great tool to pack around and do some extra farming on the go.

I still prefer to use a mouse and keyboard to do my Diablo 2 gaming, but being able to use a controller is nice whenever I want to couch game.

It’s going to be hard to say.

Diablo 2 is a much harder game than Diablo 3 is, at least now.

Diablo 3 has easier quests and guides making it more casual for anyone to just about pick up and play.

Diablo 2 requires you to do your own research, be it websites, builds, runewords guides what have you. You will have to do research.

In Diablo 2 resurrected you can’t respec easily, you get 3 respecs easy with each character you make with the first quest of Act 1. So you get Normal, Nightmare, and Hell to respec your character with a fairly easy quest.

I’m using this as an example, as you can respec your characters almost at any time, as many times as you want on Diablo III.

Diablo 2 is a hard game, being that Diablo 2 Resurrected is Diablo 2 with a fresh coat of paint it is hard as well. You will not be able to beat Hell without some help and perhaps not even nightmare without getting gear and speccing correctly.

I would say that Diablo 2 is a bit more hardcore and less casual-friendly. If you want to just beat the game for the story, Normal is not that difficult and you should be able to complete it without doing too much research.

Both You Gotta Grind…

Both games take quite a bit of grinding to get gear, but Diablo 2 doesn’t hold your hand, and III has personal loot. If you are in a public game, and a piece drops whoever clicks it the fastest gets the drop.

That’s usually why people join public games and farm different spots, making the difficulty hard but increasing rarer drops. If you are by yourself you get the loot.

Do you have to play Diablo 1 to Enjoy Diablo 2

No. You don’t have to have played Diablo 1 to enjoy Diablo 2.

If you are someone who enjoys a good story, then you should play Diablo 1 first and finish the game.

It really doesn’t matter that much though you can pick right up on Diablo II and have plenty of fun.

When it comes to the gameplay while they are similar, both being games where you kill and loot items. They both play a lot different. Diablo 1 is a much slower-paced game, while you can play it online it really wasn’t as groundbreaking as Diablo II.

Diablo II is much faster, has more characters to choose from overall a much better game and experience in my opinion.

Conclusion – Diablo 2 Resurrected is it worth it?

If you’ve played Diablo II before and looking for something new to play. Then Diablo 2 isn’t worth it in my opinion. It is the same game we loved back in the day with a new skin.

However, if you loved Diablo II as much as I did, and want to play it again on modern PCs. I think it is absolutely worth every penny. With the upcoming Ladder Release for all the ladder players out there, perhaps wait for the ladder to release to get the game.

For people who have never played Diablo II. Diablo II resurrected comes out on all consoles so you don’t have an excuse now. As one of the best games ever made is readily available to everyone with ease now.

Be prepared to grind, be prepared to lose lots of time playing this game that sucks you in with its addictive gameplay. 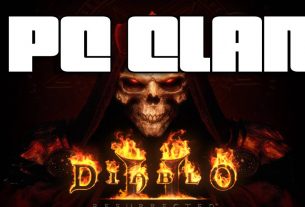 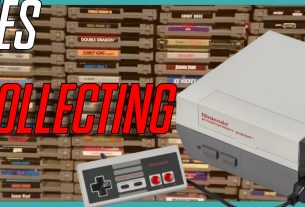 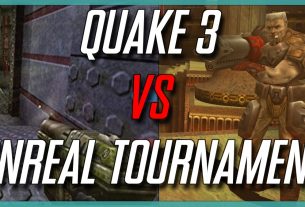